The Mekong River, which begins high in the mountains of Tibet, ends its journey in Vietnam's southern delta. Before flowing into the sea, the river branches into nine tributaries, known as Cuu Long or the "Nine Dragons”. The land of Mekong Delta is renowned for its richness and almost half of it is under cultivation. The area is known as Vietnam’s “bread basket”, though, “rice basket” would be more appropriate. These rivers are the south's life-blood, nourishing the delta's paddy fields and fruit orchards. 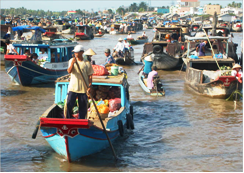 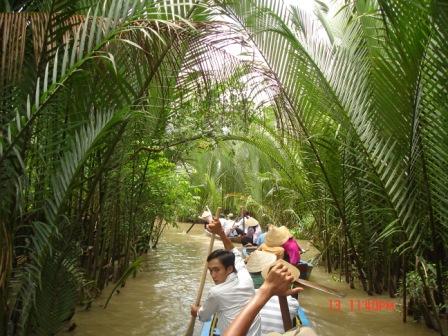 Touring the orchards, paddy fields and swamplands of the Mekong Delta, you could be forgiven for thinking you've stepped into the pages of geography textbook. Rice may be the delta's staple crop, but coconut palms, fruit orchards and sugar-cane groves also thrive in its nutrient-rich soil, and the sight of conical-hated farmers tending their land is one of Vietnam's most enduring images.
One of the most attractive aspects of the Mekong Delta is its diversity. Some visitors would single out its sweeping panoramas of paddy, fruit orchards and Khmer pagodas, others the friendliness of its people, but for most it's the delta's skein of waterways, canals and tributaries that makes the region so special. Eighty percent of Vietnam's population lives in rural areas and no region provides a better glimpse into traditional country life than the Mekong Delta. Take a cruise through the delta's tiny canals in an open boat and you'll pass stunning tableaus of people hard at work in their paddy fields, water buffaloes, tangled fruit orchards, simple, thatched-roof huts, fishermen, and excited, waving children. In the delta's towns, the river remains the central focus of life, ferrying travelers and goods to market and linking the delta with the world beyond. Take a few days to explore the floating market – Phong Dien, Cai Rang in Can Tho, Cai Be floating market in Vinh Long, the islands around My Tho, and the hillside pagodas of Chau Doc. Just a few hours from the bustle of Ho Chi Minh City, life in the Mekong Delta unfolds at its own, slow, steady pace. This is Vietnam's heartland, a place where time is still dictated by the river and the rice harvests.

Phung Hiep market
Another market, Phung Hiep market, is 31 km from Can Tho. This is the snake market, selling a plethora of living, wriggling and often poisonous snakes. Pythons and Cobras are sold here by people from the countryside that have caught them by hand, whilst others have come to purchase snakes for restaurants, medicinal reasons or personal consumption. This market is open from 5 am to 5 pm. If traveling by boat, you can add a dimension to your day by stopping and visiting some of the fruit gardens, which sell pineapple, rambutan and papaya amongst many other fruits.

Ong Pagoda
It is located in the center of the city. Ong pagoda has a special architectural style and has been preserved intact. The pagoda was built from 1894 to 1896 on 532 square meter area, on Hai Ba Trung road, near Ninh Kieu Wharf. The pagoda is roofed with double tiles, and the roof’s edges are covered with lines of dark green glazed pipe shaped tiles, while on the roof top, there are a number of multi color porcelain figured such as two dragons flanking the moon and carp changing into dragon phoenix. On either end of the roof top, there are paired statues of people holding the Sun and the Moon. Inside the pagoda, Quan Cong- a General of the three kingdom period in ancient China and an exemplar of loyalty to his Kong - is worshipped m as are Nam Hai Bodhisattva Kwan Yin, Thai Bach Tinh Quan, the Genie of the Earth, and Dong Vinh.

Vinh Long
Cai Be, one of the many well-known floating markets in the western region of southern Vietnam was formed in the Nguyen Dynasty in the 19th century. The Cai Be Floating Market is always busy, bearing all the characteristics of the locals’ life in the western region.
All the goods are transported to the market by rafts and boats. The floating market lies in the Tien River, adjacent to three provinces of Tien Giang, Vinh Long and Ben Tre.
The market is divided into two parts: buying and selling places. Rafts and boats are anchored along the two sides of the river for kilometers. From the floating market, goods are shifted for selling at inland markets or small boats take them for delivery along canals in the Plain of Reeds.

Vinh Trang Pagoda
Built in 1849 in an area with many beautiful trees, this is a greatest pagoda of Tien Giang province. The pagoda is about 1 km from the center of the city. The architecture of the pagoda is a harmonious combination of Asian and European styles, creating the splendid, but simple features of this Buddhist pagoda. Inside the pagoda are many specious statues made of wood, among which there was a collection of 18 Bodhisattvas sculpted in 1907, representing the summit in sculpture in the Mekong River plains.

Dong Tam Snake Farm
The snake farm is a center for breeding snakes producing venom for exportation. Research on snakebite treatment is also conducted here. From My Tho, visitors must travel 5 km to get to the farm where they can visit the department where snakes are bred. Dong Tam also has a collection of mutant turtles and fish on exhibit. The best way to get there is to rent a motorbike.
Other articles