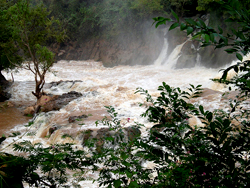 Day 1: Vientiane – Pakse -  Champassak  (L, D)
Pick up at the hotel and transfer to Vientiane Wattay airport for flight to Pakse. Meet upon arrival at Pakse airport and transfer to the pier. Board a local long-tail riverboat and cruise down the Mekong River, heading south towards the former royal capital of Champassak. Arrival in Champassak and check-in at the hotel.
Lunch at the hotel. Visit the pre-Angkorian Vat Phou Temple (6th-13th centuries). Vat Phou Temple lies on a hillside and offers spectacular views on the surrounding plains and on the Mekong River. Hindu Khmer probably chose the site because of the spring that flows from near the top of the hill. Vat Phou Temple was listed as a World Heritage site by UNESCO in 2002. Overnight  at hotel.

Day 2: Champassak – Ban Khiat  Ngong (B,L,D)
Breakfast at the hotel. Drive to the Suay minority village of Ban Khiat Ngong. The Suay men are traditionally engaged in elephant training, especially for the timber trade. Ban Khiat Ngong village has a community project offering basic but comfortable accommodation in the 240,000 square kilometer Xe Pien National Biodiversity Conservation Area, which consists of a combination of wetlands and highland primary rainforest. This day, explore the highlands and take an elephant ride trough the primitive jungle to visit the enigmatic ruins of Phou Asa Temple.
Picnic lunch. Return to Ban Khiat Ngong village, located in the wetland area. At sunset, short walk to reach the Ban Khiat Ngong pond and see myriads of birds flying back to their nests. Dinner and accommodation at the guest house.

Day 3: Ban Khiat Ngong (B, L, D)
Breakfast at the guesthouse.
Full day trekking through the wetlands to observe the amazing diversity of the fauna and flora. The area is home to rare species of birds such as Blyths Kingfishers, Crested Warblers, White Shouldered Ibis, Painted Storks and White Breasted Waterhen. Most of these birds being migratory, the best traveling period lasts from October to March.
Picnic lunch en route.Dinner and accommodation at the guest house.

Day 4: Ban Khiat Ngong – Khong island  (B, L, D)
Breakfast at the guesthouse. Drive to Ban Hatsaykhoune and take a ferry to cross the Mekong River towards Khong Island, located in the scenic Siphandone region (Four Thousand Islands). Khong Island, with its lovely fishing villages, its serene monasteries and its lush vegetation offers a unique opportunity to experience the peaceful Lao way of life. Lunch at local restaurant. Take a bike-ride to explore Khong Island. Visit Vat Hangkhong, considered as the oldest temple on the island, Ban Huay village and continue to Muang Sene to enjoy the sunset over the Mekong River. Overnight at the hotel.

Day 5: Khong island  (B, L, D)
Breakfast at the hotel. Cruise along the backwaters to explore Siphandone. During the rainy season, the Mekong River reaches a breadth of 14 kms, the river’s widest reach along its 4,350 km journey from the Tibetan Plateau towards the South China Sea; when the river recedes, it leaves behind thousands of islands and islets. Visit the surrounding islands of Done Ket and Done Som for a glimpse into the traditional lifestyle of the fishermen. Continue to Done Khone Island. Lunch at local restaurant in Ban Khone. Visit Done Khone Island and hike along its ancient railway built by the French in 1897 in order to bypass the powerful rapids when transporting goods from Cambodia. Continue to Sumphamith Waterfall. In the dry season, the Irrawaddy Dolphins, one of the world’s rarest large mammal species, congregate at the base of the rapids to hunt the fish that survive in the deep pools. Spend a relaxing hour watching these extremely shy and endangered freshwater dolphins. Return by boat to Khong Island. Overnight at the hotel.

Day 6: Khong island – Khone Phapheng - Pakse (B,L)
Breakfast at the hotel. Board a local long-tail riverboat to reach the fishing village of Ban Phiengdy and continue by car to the magnificent Khone Phapheng Waterfall, the largest cascade along the Mekong River. A fault line caused the cascade, which is 6 km wide at this point, and the astonishing force of the water has cut dramatic gorges through the brittle bedrock. Lunch at local restaurant. Drive back to Pakse and drop off at your hotel. End of tour. (Hotel in Pakse not included)