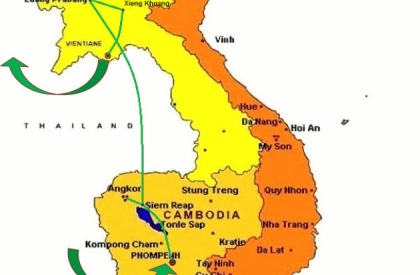 Day 1: Phnompenh arrival (D)
Upon arrival in Phnompenh, you will be warmly welcomed and transferred to hotel in city center, check in, relax. Overnight at hotel in Phnompenh.

Day 2: Phnompenh city tour ( B, L )
After breakfast at hotel, we visit the Royal Palace, built by King Norodom in 1866 on the site of the old town, and the Silver Pagoda. Located within the Royal Palace, the Silver Pagoda is so named because of its floor, which is made up of 5000 silver tiles. The treasures found inside include a solid gold Buddha encrusted and weighing 90kilograms and a small 17th century emerald and baccarat crystal Buddha. We climb up the Wat Phnom Temple, Phnom Penh's namesake, from where you can enjoy views over the tree-lined avenues of Phnom Penh city. End of your morning sightseeing tour at Russian Market.
Lunch at local restaurant.
Afternoon visit we drive to the Toul Sleng Prison Museum and the Killing Fields of Choeung Ek-both grim reminders of Cambodia's bloody past under Pol Pot. It is almost inconceivable to confront the nature of true evil here in this gentle land, but the Buddhist memorial at Choeung Ek, commemorates the 1.7 million victims of the 1975-79 Pol Pot regime. This excursion may prove distressing for some. It is, however, an important piece of this country’s historical and cultural puzzle.

Day 3: Phnompenh – Siemreap flight (B, D)
Transfer to airport for early morning flight to Siemreap. Arrival in Siem Reap airport and transfer to the city center.
This afternoon the sightseeing tour of Angkor area we spend a full day exploring the wondrous ancient ruins with the South Gate of Angkor Thom, which is famous for its series of colossal human faces carved in stone, the impressive Bayon Temple, the Royal Enclosure, Phimeanakas, the Elephant Terrace, the Terrace of the Leper King and the largest as well as the most complete temple of Angkor Wat. This architectural masterpiece was constructed in the 12th century and covers an area of about 210 hectares. We stroll around this massive edifice, seeing the many galleries with Colums, libraries, pavilions, courtyards and ponds full of water reflecting the towering temple. Dinner at local restaurant and enjoy Apsara Dance show. Overnight at hotel in Siem Reap.

Day 4: Siem reap – Angkor tour (B, L)
The jungle covered temple of Ta Prohm (where Jolina Joli filmed The Tomb Raiders) is an incredible sight. There are enormous fig trees and gigantic creepers which embrace themselves in the stone foundations of the structure giving the impression of man's creation being reclaimed by the powerful forces of nature.  We explore this masterpiece as well as some of the surrounding temples including Banteay Kdei, Sra Srong, Ta Keo, Thommanon and Chau Say Tevado. The grand circuit with Preah Khan, Kravan, Neak Pean, Krol Ko, Ta Som, East Mebon are also visited this afternoon before we stop at view the sunset at Preah Rup Temples. Overnight  in Siem Reap

Day 5: Siemreap – Luang prabang ( B )
Breakfast at hotel, Heading out of town we make our way by traveling on a newly paved road to the intricately carved and well preserved temple of Banteay Srei. Along the way we make stopover at the Preah Dark village and we follow these with a visit the Banteay Samre Temple adorned with impressive relief’s depicting scenes of Vishunu as well as Krishna legends. Afternoon, we will drive to the floating village of Choueng Kneas village, where you will take the boat to visit the way of life Cambodian poor people along with schools, restaurants, hospitals and much more floating on the great lake of Tonle sap. You many even see enterprising children floating in buckets selling soft drinks and floating pig pen. Transfer to airport for flight to Luang prabang.
Overnight  at hotel in Luang prabang.

Day 6: Luang prabang ( B, L )
We start city tour, visit Wat Visoun, the 16th century temple served as a small museum for religious artifacts; Wat Aham, the early 19th century temple, whose two guardian figures at the foot of the steps which represent two characters from the Ramayana - Hanuman, the Monkey God and a fierce Yaksa; Wat Xiengthong, the 16th century temple which, more than any temples in Luang Prabang, epitomizes all the elegance and grace of Luang Prabang architecture;  Climb up Phousi Hill, the 328 steps leads to the summit of Phousi hill  that dominates the sky-line of Luang Prabang overlooking the finest panoramic view in the whole Luang Prabang. From there, we explore Street Night Bazaar, where you can find the lovely collection and handmade textile by local and hill tribe people surrounding Luang Prabang. Overnight in Luang Prabang.

Day 7: Luang prabang – Elephant riding – Pak oucave ( B, L )
We depart hotel to the boat landing, and take an excursion by boat upstream on the Mekong to visit Pak Ou cave in the side of a lime stone cliff and opposite of the mouth of the Mekong and Ou rivers. On the way we stop to enjoy the Elephant riding at Elephant Camp in the forest. It is really an interesing experience.
The sanctuaries at Pak Ou consist of two large caves, both repositories for thousands of Buddha images, which range from mere centimeter to two meters in height. En route, Lao typical villages are barely visible behind a screen of foliage. Slender canoes bobbing by the shore, bamboo poles and floats mark the location of nets and fish traps. Our first stop will be at Ban Muangkeo, a well-known village for Lao traditional rice whisky, namely Laoh-Khao to be distilled. We are welcome to taste it and also take away. Lunch is served at a riverside restaurant. We arrive back at Luang Prabang in late afternoon, visit the National Museum, the former Royal Palace which houses the collection of valuables including the famous Prabang Buddha statue, gifts received from foreign dignitaries…etc, Overnight in Luangprabang.

Day 8: Luangprabang – Xieng Khoang ( B, L)
Breakfast at hotel, leaving the town and drive out to Xieng Khouang, which was devastated by American bombing between 1964 and 1973. These back roads are a great way to explore the real Laos. We see very few other travellers, mostly rural dwellers who are just as interested in finding out about our lives as we are of theirs. The drive is very long , but we can can make many stops at our pleasure, to stretch our legs and take some wonderful  photographs. On arrival we explore the province's old capital of Muang Khun and the  nearby villages, home to the Hmong hill tribe and Tai Dam people. They have an interesting local culture and a colorful history.
Overnight  at hotel in Xieng Khouang.

Day 9: Xieng Khoang – Vientiane ( B, L )
Xiengkhouang was devastated by American bombing between 1964 and 1973. Upon arrival, we transfer out to visit the Plain of Jars, an impressive archaeological site where hundreds of large stone jars are littered all over the plateau. These huge jars are supposedly over 2,000 years old, but most of archaeologists are still mystified about their purpose.
You are then transferred to airport for flight to Vientiane. Arrival transfer to  hotel, check in, relax.

Day 10: Vientiane ( B , L )
This morning, we start visiting the major sights of the capital; including the oldest Wat Sisaket, the temple with thousands of miniature Buddha statues and the former royal temple of Wat Hor Prakeo previously housed the famous Emerald Buddha Image. On the way to the famous and sacred structure of That Luang Stupa, we stop to take some pictures of the imposing Patuxay Monument, which is well known as Vientiane’s own Arc de Triumph.
Afternoon, take a trip by road to outskirts of Vientiane, following the road along the bank of Mekong river to visit the Buddha park of Xieng Khuan, the park (28km East of Vientiane), containing a combination of hundred status of Hindu divinities and Buddha. We drive pass villages on the bank of Mekong through beautiful views of vegetable garden, tobacco plantation ... etc
Overnight in Vientiane.

Day 11: Vientiane departure ( B )
Free until transfer to airport for your departure flight. End of tour.