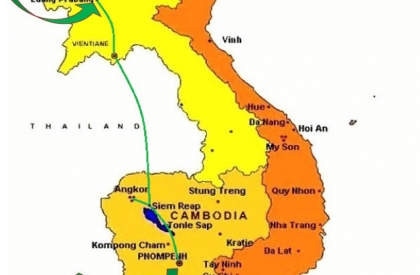 Day 1: Luang prabang arrival ( L )
Arrive in Luang Prabang, the ancient first capital of Lane Xang kingdom, the center of religious life in Laos and today the World Heritage City. Arrive in Luang Prabang and transfer to our hotel for check-in. In the afternoon, we take a sightseeing tour of the sacred city of temples, of which nearly fifty temples still remain in the town and surrounding areas. Visit Wat Visoun, the 16th century temple served as a small museum for religious artifacts; Wat Aham, the early 19th century temple, whose two guardian figures at the foot of the steps which represent two characters from the Ramayana - Hanuman, the Monkey God and a fierce Yaksa; Wat Xiengthong, the 16th century temple which, more than any temples in Luang Prabang, epitomizes all the elegance and grace of Luang Prabang architecture; Phousi Hill, the 328 steps leads to the summit of Phousi hill that dominates the sky-line of Luang Prabang overlooking the finest panoramic view in the whole Luang Prabang.

Day 2: Luangprabang – Elephant ride – Tadsea waterfall (B, L)
We take the route No. 13th south of Luangprabang , after 30 minutes we arrive at Annsavanh village , where we cruise the Khan River in a long tail motor boat for about 10 minutes . On the way you will experience authentic Lao life style with villagers fishing and growing vegetables along the way we arrive at stunningly beautiful Sae waterfall , where you will ride the majestic elephant through the waterfall area surrounded by beautiful scenery for about 30 minutes . Afterwards you can spend your time swimming and relaxing in the gorgeous natural pools until it is time to return back to Luangprabang.

Day 3: Luangprabang – Plain of Jar (B, L)
After breakfast we visit the The National Museum (close Tuesday) at the former Royal Palace, which displays a lovely collection of artefacts, which reflect the richness of Lao culture dating from the days of the early kings right through the last sovereign. The National Museum and the Central Market are not to be missed. We are driving overland on up Hill Mountain with splendid natural scenery to Xiengkhouang, where was devastated by American bombing between 1964 and 1973. Upon arrival, we transfer out to visit the Plain of Jars, an impressive archaeological site where hundreds of large stone jars are littered all over the plateau. If time permits, we are seeing the old capital of Muang Khoun [if time permits] and the nearby villages, home to the Hmong hill tribe people. They have an interesting local culture and a colorful history. Overnight in Phonsavanh

Day 4: Plain of Jar – Vientiane By flight (B)
Breakfast at hotel, we visit Central Market and drive (10 km SE of Phonesavanh) to visit the Plain of Jars, the archaeological stone Jars, which dated back at least 2000 years ago and also continue to visit the Plain of Jars (size 2.3). En-route we visit villages of Hmong minority group, where we can learn more about their housing, living and working conditions which are completely different from others. In the afternoon, transfer to airport for flight to Vientiane/Overnight in Vientiane

Day 5: Vientiane ( B , L )
Arrive in Vientaine visit Wat Sisaket, the oldest temple to have been survived from the Siamese war of 1828 and its cloister contains more than 8000 Buddha statues; Wat Ho Prakeo, the former home-temple of the Emerald Buddha statue or Pra Keo, but today it contains a collection of Buddha statues, antiques and all artifacts found in around Vientiane; That Luang Stupa, the single most important monument in Laos, which was built to cover the original small stupa containing a piece of the chest bone of Buddha; Patouxay (Arch de Triumph),

Day 6: Vientiane - Siem Reap flight ( B,D )
Breakfast at hotel, transfer to the airport for flight  to Siem Reap. Upon arrival at Siem Reap International Airport, you are met and transferred to hotel(the room might not be ready).
Start your tours to visit the graceful 11th century Temple of Shiva – Banteay Srei – and the Banteay Samre Temple. On the return trip, experience the impressive Ta Prohm Temple which is mystically enveloped by the jungle. Dinner at local restaurant and enjoy the Apsara Dance show. Overnight at hotel in Siemreap

Day 7: Siem reap – Angkor Tour ( B, L )
Breakfast at hotel.
In the morning, visit the most famous of all the temples on the plain of Angkor: Angkor Wat. The temple complex covers 81 hectares and is comparable in size to the Imperial Palace in Beijing. Its distinctive five towers are emblazoned on the Cambodian flag and the 12th century masterpiece is considered by art historians to be the prime example of classical Khmer art and architecture. Angkor Wat's five towers symbolize Meru's five peaks - the enclosed wall represents the mountains at the edge of the world and the surrounding moat, the ocean beyond.
Afternoon, visit the ancient capital of Angkor Thom (12th century). See the South Gate with its huge statues depicting the churning of the ocean of milk, the Royal Enclosure, Phimeanakas, the Elephants Terrace, the Terrace of the Leper King and Bayon Temple (unique for its 54 towers decorated with over 200 smiling faces of Avolokitesvara).

Day 8: Siem Reap – Phnompenh ( B,L )
Breakfast at hotel, transfer to the airport for flight to Phnompenh. Pikc up at Phnompenh airport, transfer to hotel in city center
Afternoon, we start Phnom Penh city tour: Visit the Royal Palace, built by King Norodom in 1866 on the site of the old town, and the Silver Pagoda. Located within the Royal Palace, the Silver Pagoda is so named because of its floor, which is made up of 5000 silver tiles. The treasures found inside include a solid gold Buddha encrusted and weighing 90kilograms and a small 17th century emerald and baccarat crystal Buddha. Visit Central Market ( or Russian market ), end your afternoon with the visit of the Wat Phnom Temple, Phnom Penh's namesake, from where you can enjoy views over the tree-lined avenues of Phnom Penh during sunset.

Day 9: Phnom Penh - Departure (B)
Breakfast at the hotel. Then take a half-day city tour at the Killing Field and Toul Sleng Museum of the genocide Tuol Sleng Museum (Museum of Genocide): former Tuol Svay Prey High School, in 1975 it became the Khmer Rouge's main torture and interrogation center. It was known as Security Prison 21 - or just S-21.Transfer to the airport for your departure flight. End of tour.

Thank you for traveling with Asia View Travel.