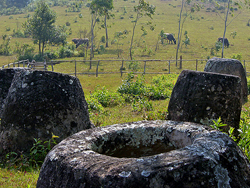 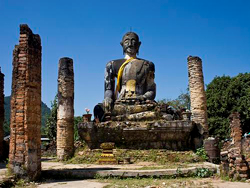 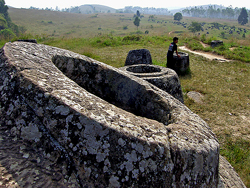 Muang Phouane was the main old town of Xieng Khouang province with its historical sites such as the Siphom temple, Phia Vat temple, That Chom Phet temple. According to legends, these temples were built 250 years before the establishment of the Lane Xang kingdom.
It is a province that holds great importance in Lao history for the war waged against foreign imperialism and was the stronghold of revolutionary forces.
The hundred of giant jars of Xieng Khouang are carved out of solid hunks of rock from the mountains surrounding the valley. The stone jars of all sizes strew all over the plateau make an awesome sight. Thus scientists have dubbed it "Plain of Jars". The biggest jar is 3.25m high. According to the Lao history, the ancient jars were made during Khun Chuang's time to store wine for the celebration of his conquest of Pakhanh City (Xieng Khouan). And some researchers claimed that they were made to store dead human bodies as was the practice of ancient believers. This conclusion derived from the fact that human bones along with daily utensils and ornaments made of clay and metal were discovered in the area. According to many researchers, these jars are between 2500 to 3000 years old. It is believed that they were made by Stone Age men who lived in this part of Laos then.
The Hot Springs, approximately 52 km north of Muang Phonsavanh, are located in Muang Kham district, another area of historic significance. The water reaches a temperature of 60 degrees Celsius.

1. The Plain of Jars:
The Xieng Khuang Plateau is home to the Plain of Jars. This enigmatic archaeological site consists of clusters of stone jars, varying in height and diameter from one to over three meters dotted in the Xieng Khuang landscape. Over fifty sites have been recorded within the province ranging from a single jar to groups containing 400 jars. One local legend states that the jars were originally constructed for an ancient king, whilst archaeological evidence suggests that the jars are funerary urns, carved by Iron Age people around 2,500 years ago. Three major sites are easily accessible from Xieng Khuang, and have been cleared of unexploded ordnance (UXO), although it's always best to stay on the main paths. Site One (Thong Hai Hin) is located 15 km southwest of Phonsavanh. This site has the biggest collection of jars over 250 and also the largest single jar, which according to local lore is the victory cup of the Lao king Khun Jeuang, who liberated the local people from an oppressive ruler.
The most attractive site is a further 10 km south Hai Hin Lat Khai or Site Three. The main group of some 150 jars is located on top of a small hill from which one can enjoy great views not only of the surrounding plains, but also of the prosperous farming community of Ban Xieng Dee, in the valley below. This Lao village, located at the entrance to the jar site, has a small Buddhist temple where visitors are welcome.

Site 1
Site 1 or Thong Hai Hin ("Stone Jar Plain") is the most visited of the sites, but unfortunately its proximity to the nearby air base, which houses the Lao PDR's squadron of ageing MiGs, somewhat mars the landscape. There's a pavilion built for a visit by the Thai crown prince, a member of Laos's surrogate royalty – where you can also buy drinks. Following the path from the pavilions to the jars, you'll quickly come to Hai Cheaum ("Cheaum Jar"), a massive jar 2m high that was named after the Tai– Lao hero of lore, who is celebrated in one version of the jar myth as the liberator of the people of the Plain of Jars from a cruel overlord named Chao Angka. Legend has it that the jars were made to ferment rice wine to celebrate the victory; as the jars bear a passing resemblance to lào hái jars used today, the liquor-loving locals didn't have to stretch their imaginations too far to come up with this theory. Walk downhill a little way and you'll find yourself amid another group of jars, one of which has a crude human shape carved onto it. In the hill off to the left is a large cave that the Pathet Lao used during the war, and which, according to local legend, was used as a kiln to cast the jars. Erosion has carved two holes in the roof of the cave – natural chimneys that make the cavern a worthy kiln of sorts. Colani suggests that the cave was used as a crematorium: in and around the cave she found the remains of what she believed to be commoners not lucky enough to be interred in the stone funeral urns, which were reserved, she argued, for the ashes of the nobility.

Sites 2 and 3
Back on the Phonsavan– Muang Khoun road, the turn-off for sites 2 and 3 is 3km further on at Lat Houang. Zipping across the flats surrounding Lat Sen, the town that played host to the old French airstrip, towards Phaxai and the Jar sites, you'll pass narrow dirt runways on the grassy meadows and hillsides. These clearings are used by hunters to trap swallows in nets that they trigger from camouflaged huts at one end of the strip; smoky fires bring bugs to the surface of the clearing, attracting the swallows. The most skilful hunters can catch several hundred birds on a good day, netting a tidy sum. The birds are sold at Phonsavan's market.
Ten kilometres on from the turn-off, you turn left along a dirt track – a road in slightly worse condition than the Phaxai road – and follow it for 2km through a village just large enough to support a tiny monastery, until you wind up at two adjacent hills, one on either side of the road. Nearly a hundred jars are scattered across the twin hills here, lending the site the name Hai Hin Phou Salato ("Salato Hill Stone Jar Site").
The gateway to Site 3, the most atmospheric of the three, lies in the village of Ban Xiang Di, 4km up the Phaxai road on the left. Large Lao Phuan houses line the way to Wat Xiang Di, a simple wooden monastery 1km from the turn-off, where you'll find the path leading to Hai Hin Lat Khai, also known as Hai Hin Xiang Di. There's a depressing, bomb-damaged Buddha here that the guides like to point out. Pick up the path at the back corner of the monastery compound, which hops a stream and cuts uphill through several fields before arriving at a clearing with more than a hundred jars and sweeping views of the surrounding countryside.

2. Muang Khoun (Old Xiang Khouang)
A ghost of its former self, Muang Khoun, old Xiang Khouang, 35km southeast of Phonsavan, was once the royal seat of the minor kingdom Xiang Khouang, renowned in the sixteenth century for its 62 opulent stupas, whose sides were said to be covered in treasure. Years of bloody invasions by Thai and Vietnamese soldiers, pillaging by Chinese bandits in the nineteenth century and a monsoon of bombs that lasted nearly a decade during the Second Indochina War taxed this town so heavily that, by the time the air raids stopped, next to nothing was left of the kingdom's exquisite temples. The town was all but abandoned, and centuries of history were drawn to a close. All that remains of the kingdom's former glory is an elegant Buddha image towering over ruined columns of brick at Wat Phia Wat, and That Dam, both of which bear the scars of the events that ended Xiang Khouang's centuries of rich history. Although the town has been rebuilt and renamed, it has taken a back seat to Phonsavan, and, with little in the way of amenities for travellers – there are a few fõe shops around the market, but the lone hotel has closed – it's most convenient to visit Muang Khoun as a day-trip.
A long row of low-slung wooden shophouses, centred on the market, springs up along the road from Phonsavan in the shadow of towering That Dam, signalling your arrival in Muang Khoun. A path alongside the market leads up to the blackened hilltop stupa, the base of which has been tunnelled straight through to the other side by treasure seekers hoping to find more than a simple bone of the Enlightened One inside. A British surveyor who travelled through the area in the service of the Siamese king in 1884 – shortly after the invasions by Chinese Haw – surmised that the bandits pillaged the stupa, making off with 7000 rupees' weight of gold. Continuing on the main road beyond the market, you'll pass the ruins of a villa, the only reminder that this town was once a temperate French outpost of ochre colonial villas and shophouses, and arrive at the ruins of sixteenth-century Wat Phia Wat. Brick columns reach skywards around a seated Buddha of impressive size, a mere hint at the temple architecture for which the city was renowned. The only remaining example of Xiang Khouang-style architecture is Wat Khili in Louang Phabang, but Wat Khili has been modified so many times that you wouldn't know its link to Xiang Khouang's monasteries unless you viewed it from the back. The recently completed temple at Wat Siphoum, the uninspiring structure nearest the market, bears little trace of the old designs for which the city's monasteries were known and serves notice of how much of Xiang Khouang's culture has been lost.
Other articles